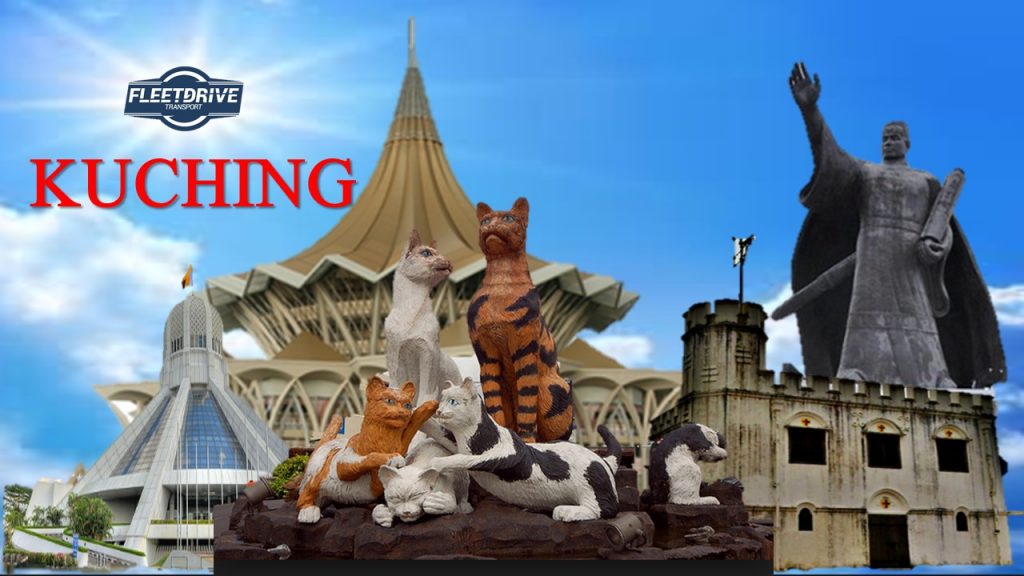 FLEETDRIVE welcomes you to Sarawak the Land of the Hornbills! Sarawak is located on the island of Borneo and the third largest island in the world.

Welcome to Kuching also known as the City of Kucing (Cat). Kuching is the capital of Sarawak, situated on the Sarawak River at the southwest tip of the island of Borneo. No other city in Malaysia has such a romantic and unique history. Kuching is a major food heaven destination for tourists and the main gateway for travelers visiting Sarawak and Borneo.

As a very attractive city, most tourists goes to Sarawak just to explore Kuching. There are many fine examples of colonial-style architecture, a beautiful waterfront and a number of interesting museums including the historic Sarawak Museum. From the river you will see picturesque Malay villages, a golden-domed mosque, a Victorian fort, a whole street of 19th century Chinese shop houses and an imposing wooden-roofed palace, all set against a background of distant mountains. For all of the adventurous one, Kuching offer a lot of activities that bring you a step closer to the nature. The nearby national parks include the famous Bako and Kubah National Park, home of the rare proboscis monkey. Gunung Gading National Park at Lundu , where giant rafflesia flowers bloom.

Other attractions includes the Semenggoh Widlife Centre, yearly Rainforest World Music Festival (RWMF) event, Sarawak State Assembly Building (DUN Sarawak), The Astana, Fort Margherita, Kuching Cat Museum and the Sarawak State Museum. Approximately 50 minutes’ drive from Kuching, you can shop for products from Indonesia which located at the border of Sarawak and Indonesia which is known as Serikin, Bau. Serikin opened only on weekends.

A tour or a travel is never complete if you have not tasted their local delicacies. Remember to have a taste of all the popular Kuching’s food. They are Sarawak Laksa, Kolok Mee, Mee Sapi, Manok Pansoh and Nasik Aruk just to name a few. If you are looking for accommodation, not to worry as Kuching is not letting you down. There is a various excellent range of accommodation, from luxury via boutique to budget, good restaurants, and nightlife to suit most tastes and pockets.

There are a number of stories as to how this Kucing in Malay (Cat) name came about. The two more likely explanations are that it derives from the Chinese word kochin, meaning “harbour,” or that it is named after the mata kuching or “cat’s eye” fruit, a close relative of the lychee that grows widely here.

To explore Kuching, you can rent a car, take a bus or hail a taxi. It is impossible to really enjoy Kuching from the air conditioned comfort of a tour bus. To make the most of your visit you must put on your walking shoes, take to the streets and drive around by renting your car rental from us, or having the luxury of having a private chauffeur at a affordable rate.  Self-Drive Car Rental, Chauffeur or Tour service, FLEETDRIVE is ever ready to serve you.